~ On the 21st of February, 6 Rotaractors from our club visited Chennai, hosted by Rotaract Club of Madras Central, R.I District 3230. Invited by the district to attend their conference. We had a fun filled journey by car to Chennai and were received warmly by the hosting club. After dining with them for breakfast, we were taken to the conference secretariat to interact with the conference committee, which was followed by lunch with the DRR, Rtr PHF Ram Kumar Raju. This was followed by an outing to the beach and a few other places for shopping in Chennai. In the night we were hosted for dinner by PDRR Rtr Solomon Victor and his club.

~ Day 2, we spent the day at the district conference where we witnessed amazing speakers who motivated us. It was a proud moment indeed when our member Rtr Rachel, a past member of 3230 was asked to speak on stage about her experience and participate in a session. In the night, we joined with Rotaract Club of Veppery, our hosts for their project along with Tree foundation, for a turtle walk. We had an orientation about the dangers they face by fishermen and toxic wastes. This was followed by a four hour midnight walk along the beach on Iminjikarai beach where we watched the little ones hatch, released them into the ocean. It was a once in a life time opportunity that the club let us share with them. We then had dinner with PDRR of 3230. Day 2 at the conference was equally stimulating and we were invited on stage for the IDYE presentation. Three of our rotaractors shared their experiences on stage. We then had letter -head and momento ex change with 5 clubs and the district. After a jam-packed 3 days, we returned to bangalore, tired but richer by a large number of friends, having experienced once again, true rotaraction knows no boundaries 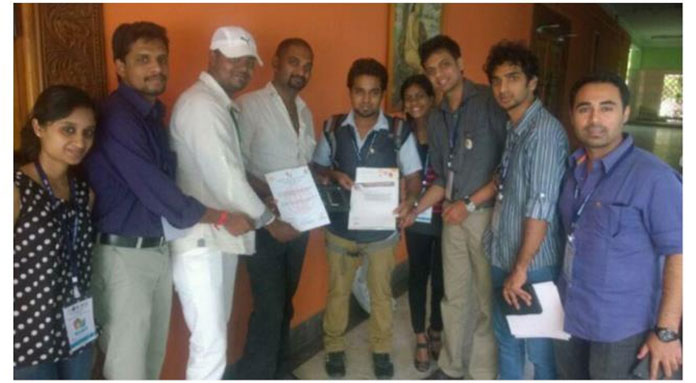