~ Rotaract Club of Koramangala members had an orientation with 2 members of the LGBT community on 13-Oct-2014 at McDonald’s, Koramangala. Seven members of our club met with Ayaan and Jomin at 7 pm. After introductions, Ayaan and Jomin talked about their community and the ‘Pride’ event that’s scheduled in November. ‘Pride’ is a worldwide stance and movement of the LGBT community to fight for equal rights and justice. Pride parades and demonstrations occur every year. They emphasized on the fact that one’s sexuality is not a choice. There is still a lot of discrimination against them in the society. There are LGBT clubs like WHAQ (We are Here And Queer) and GRAB (Good As You). They have LGBT allies who support their cause. Support during the ‘Pride’ event and financial help are what they are looking for. Rotaractors informed them that our club will be an ally and can support them by taking part in the ‘Pride’ event which will be held in Bangalore on 23-Nov-2014. There will be several events such as Pride March, Garage Sale, Marathon, Diversity Fair, Freeze Mob, Queer Music etc. We also put forth the idea that representatives from the LGBT community can speak to the audience about their cause and experiences during Transform events or other meetings. They were happy about this. Details about helplines for people who want to come out about their sexuality was also discussed. We summed up by saying that we will help them in their fight. In turn they can participate in Rotaract events. Rotaract is looking forward to a wonderful and lasting collaboration with the LGBT community.The LGBT members were delighted by our support and amity and have expressed their gratitude. This session with them truly opened our eyes about their community, the issues they face and where we could pitch in to help. We were also amazed by their passion and show of emotional strength. 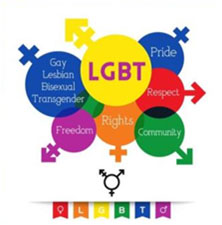